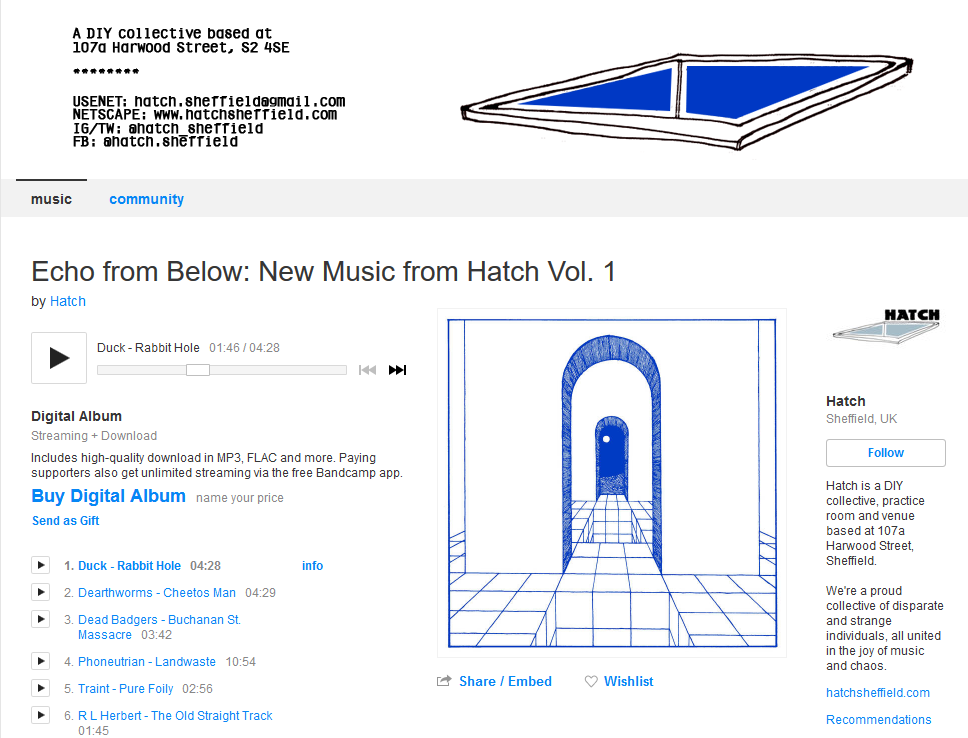 ‘Echo From Below’: New Music from Hatch Vol. 1: The Full Memo…

We are happy to announce the full tracklist from our ‘Echo From Below’: New Music from Hatch Vol. 1. The music compilation features 18 whoppers from our very own collective of musicians who operate, collaborate and perform within our creative community. It is released as part Bandcamp’s ‘No-Fee Day’ and all proceeds from this weekend’s sales will go to a BME charity in the UK.

So, without much further ado, here’s your tracklist. Check out the full compilation or click on the individual bands to hear their songs immediately.

Echo From Below: Full tracklist

DUCK are a Sheffield/Leeds wonky synth/punk/noisepop trio. “Rabbit Hole” is a riff-tastic singalong about sinister online algorithms and the damage they do. It’s taken from their LP There Are No Normal Conversations Any More which is out now on Hell Hath No Fury Records.

First fresh new digital track from a set of songs recorded at Tye Die Tapes studios this year. A Sheffield based 5 piece of differing musical tastes, but all united by gloom and ill health. The track briefly approaches the growing issue of incels in management positions.

Still as nicotine stained as ever, but now transnational and familiar with computers, the Badgers serve up catastrophic, corporate, collateral co-morbidity consumerism with bells on.

Creating beats, soundscapes, meditations and freakouts, Phoneutrian is a Sheffield-based musician part of the Interworld Media group. Landwaste” has been bubbling and fermenting for a while now, made of reconstituted digital sounds. It starts off gooey and messy before falling down a few different wormholes.

RL says: “Music that isn’t music. A collaboration with myself. The distant sound of rain.”

The duo is a collaborative project between Jake Horgan (Phoneutrian) and Izzy Hadlum, who is a key member of the Plenty Fuss collective, who have put on some of our favourite gigs over the last year or so. They founded as a more experimental collaboration for Tramlines 2019, and have slowly developed into a more polished, but equally as exciting guitar based outfit; drawing inspiration from 90s indie, 80s goth, dream pop and ‘wandering lambs’.

The track itself begins with a gentle, haunting ambience, that slowly develops into minimal, emotive post-punk. Recorded at Delicious Clam studios earlier this year, Izzy went into more detail about the lyrics:

“It’s partly about the paradox of sometimes feeling less alone when actually on your own – finding peace in that solitude, being comfortable with that , but also mixed in with an insomniac mood, and the frustrations of modern pressures on the psyche”.

It also features drumming by Tom Sprackland, a regular member of both Slug Milk and Feudalism Now

Bad Holiday touches on a British tourist’s first few hours on the beach of Rio de Janeiro. The lo-fi rock tune was recorded in a single afternoon and features the vocal delights of Night Flowers’ Sophia Petit and the drums of Audacious art Experiment legend, Luke Twyman.

FEUDALISM NOW! is a group of musicians embracing The Great Chain of Being and commitment to repetitive toil under autocracy to explore new ways of making “improvised” music.  This track is the first of several recorded at Delicious Clam with an 18 member group. It’s an open group, and you can find more about joining here.

Hectic drums. Filthy bass. Nervous vocals. This is Yo Dynamo. Now, get out your dance mat…

Another one from the surprisingly prolific Loic J Tuckey and this time it’s a collaboration with members of Cowtown. Howhiyo is the digital remains of a late-night jam session between the three musicians and features a kraut-style groove backed up by a synth in a spacesuit.

Post-apocalyptic soundscapes for sad cyborgs – via the laptop and mind of Edith Rothwell. Also an artist and creator of this compilations cover

Circus master to her troupe of weirdo windup gizmos, quasi-instrument object-things and tape slayers cries and bemoans their failures in the most splendid technicolour blarb-garb summoning sheer bliss-via-anxiety happenings.

Elizabeth Short is a performance artist that works with her body, sound and photography. She is based in the North of England.

Blanchard are some very noisy bois – ‘the blues ain’t blue’ is the third track on their recent EP ‘Holy Shit’ which is a reflection on the 1979-80 manifesto of the same name by artist Hundertwasser. A derisory essay on man’s disconnection with waste and our abuse of the planet.

A swamp based collective of improvising musicians, led by Rowan Tinker and using a full arsenal of misused folk instruments. This track was recorded live at Hatch during preparations for the first Midnight at the Avant Garage, back in 2019.

Local weirdo crooner and friends on a circa ‘017 psychedelic wig out. Horse in a blue shirt.

So, that’s it. If that’s tickled your fancy then why not have a bob on the whole thing! 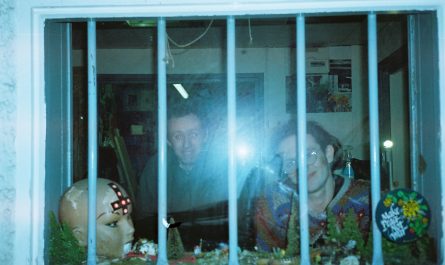